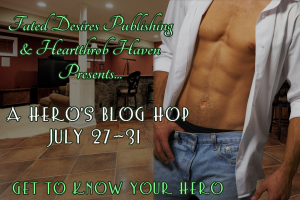 Thank you to everyone who participated!!

Welcome to A Hero’s Blog Hop where you’ll get to see things from the eyes of the hero.  I’ve chosen Jon Cripps from my romantic mystery, The P.U.R.E. because that novel was written solely from the heroine’s first person point of view. We only saw Jon as Gayle saw him–a big, strong, silent type with quirky communication skills.

So…I think it’s only fitting that we give Gayle’s hero a chance to share his POV.

This is the scene at a work party held at the home of one of the big cheeses. Gayle has rescued Jon from the overly amorous clutches of their client. They are alone in the host’s home office and their relationship is close but purely platonic. Plus Jon is not at all who Gayle thinks he is. WARNING: Minor Spoiler ahead if you haven’t read The P.U.R.E., but not enough to spoil the overall book. It’s the least surprising of the reveals in the book.

I’d been itching to get inside Bob’s office all night. Gayle being the catalyst for my invasion presented a slight complication but perhaps I could kill two birds with one stone–get the bugs planted and keep Gayle out of trouble. Again.

I pulled the door shut behind us to keep Nicky from following but also because Gayle had grown loud and more boisterous and keeping a low profile was a better way to play the scene. Time to wrap the party up and get her home.

“Thanks, Gayle.” I hitched a hip on the edge of Bob’s desk. “I never thought she’d be so persistent.”

“You’re weckum.” She swayed, her eyes glassy and wild.

Wow. She was shit-faced. But I’d watched her. She’d only had maybe two glasses, or so I thought. How and when had she consumed more without my noticing?

“Well-come.” Her second attempt wasn’t much better than her first and she obviously knew it. Snorts of laughter as she moved closer wafted a cloud of alcohol my way.

“Gayle, how much have you had to drink?”

“Nosso mush.” She jerked forward and thrust three fingers in my face, forcing me to flinch to save my eyeballs. She changed finger positions, pantomiming holding a thimble-sized object.

I caught hold of her elbows to keep her from falling on her ass. She had never seemed so tiny and vulnerable as she did in that moment. Thoughts I had no business entertaining made a play for control of my brain and other parts of me. No. No. No. I couldn’t allow them to gain any sort of foothold. Business. Just business. We needed to keep it that way. I needed to finish my mission, gather evidence then turn the screws.  “Maybe I should take you home.”

The smile on her face fell and she stilled. “You, Jon Cripps, are looking very … kissy … kiss-bull.” She slid her arms up my chest and around my neck.

Sweet Jesus, give me strength! She pressed closer, her body warm and supple against mine. My blood roused at the overwhelming temptation–her scent, the press of her breasts, her large blue eyes gazing up into mine, flaxen hair tousled like she’d just rolled out of bed. Bed… my bed… naked. No! Not my bed! Think of Thalia. Think of the bureau. Think of the mission. Think of Bob just on the other side that door, of Kenneth, of Jeff. Don’t screw this up and for God’s sake, keep your hands off her.

She reached up and exerted the barest minimum of pressure to pull my head closer to hers. I let her. I couldn’t stop myself. Two warm lips so close, so close. She kissed me. Or did I kiss her? It didn’t matter because as soon as she did, I did, the quicksand caught hold and dragged me down. I didn’t even put up a fight.

She parted her lips, welcoming me inside, and my traitorous tongue charged forward and took what she offered. I shouldn’t have done it, shouldn’t have taken her in my arms. I’d always known that if I ever did, if I ever succumbed in a moment of weakness, I’d be forever lost. And I was.

Only she was drunk, unable to control her impulses. She’d have never kissed me had she been sober. I needed to stop it, stop the descent from accelerating. Why wasn’t I? How was a woman so delicate and small able to bring me to my knees with just a touch, just a kiss?

Delilah. She was my Delilah, and I knew then the only way I’d ever be able to purge her from my system would be to die with the Philistines…but what a way to go.

So, if you liked that and want to read Gayle’s take on that same scene and the rest of the story, please buy The P.U.R.E., available at these fine booksellers:

OR if you’re a member at Goodreads and live in the US, I’m currently doing a giveaway of 2 signed copies of The P.U.R.E. Offer ends August 6th!

Then visit the other blogs on the hop for more chances to win prizes!

This is a Blog Hop!