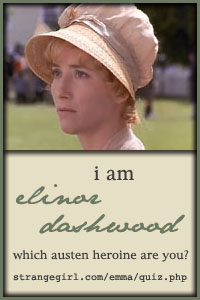 As to which Austen heroine I am most like, the quiz says:

You are Elinor Dashwood of Sense & Sensibility! You are practical, circumspect, and discreet. Though you are tremendously sensible and allow your head to rule, you have a deep, emotional side that few people often see.

No shock at my result. Anyone familiar with the possible answers (Elinor Dashwood, Marianne Dashwood, Elizabeth Bennet, Fanny Price, Emma Woodhouse, Catherine Morland, Anne Elliot) could pretty much tell which heroine would claim which multiple choice answer. Whilst (NOT “while”) taking it, I thought I’d be dubbed Jane Bennet, mistakenly thinking this a Pride and Prejudice quiz at first, but substitute Anne Elliot for Jane and I’m guessing she was probably my close second.

I’ll say though that Elinor Dashwood does seem apropos for me, especially as brilliantly portrayed by Emma Thompson. The scene in which she snapped at Marianne who accused her of having no heart when they thought her love interest had married another still guts me when I watch it.

Hmm, it may be time to read some Austen…or at least whip out one of my many Austen dvds.

2 thoughts on “Which Austen Heroine are YOU?”