You get the idea.  Examples would include House (Hugh Laurie’s eponymous character), Andy Rooney from 60 Minutes (RIP), Hallmark’s Maxine, and The Grinch.  Amongst up and coming curmudgeons I’d include Sheldon, the physicist nerd from the Big Bang Theory, which also goes to show that not ALL curmudgeons are old.

Being a curmudgeon is a glass is half empty attitude. It’s the little old lady (played by Clara Peller) demanding “Where’s the Beef!” in the famous Wendy’s commercial of the 80s. It’s bracing for the worst (because everyone wants to rip you off) but secretly hoping for the best. It’s crusting over the outside to protect the tender, gullible insides.  I’d go so far as to say that within every curmudgeon is a sensitive but bruised soul.

So what is a darkly romantic curmudgeon? Isn’t romance the antithesis of curmudgeonliness? Well, yes and no. They are indeed yin and yang, opposites, but together they are pretty terrific. Let me explain.

People often say they “fall” in love, as if it’s not a natural state.  For curmudgeons, it’s not, but when we fall, we plummet.  Personally, I love reading stories where the hero or heroine stands atop a lofty perch built on arrogance or hubris, greatly increasing the distance of their forthcoming fall into the waiting arms of love.  The farther the fall, the greater the thrill in my tummy as I read.  I love to see the main character flailing about in mid-air, trying desperately (but failing) to grab hold of something familiar to check his or her fall.  It’s scary; it’s dark; it’s sarcastic; it’s grouchy; it’s curmudgeonly!  That character will fight tooth and nail denying love matters to them because they are deathly afraid no one will catch them before they strike the ground. Wise readers get that it’s all a front with a kind of smug omniscience, especially if they’ve been treated to the object of the affection’s point of view and know those arms are open and ready to receive…or will be if the object looks up.

So, favorite fictional romantic curmudgeons who demonstrate that reluctance or grouchiness I’m talking about?

But how does the “darkly” part fit in?

All my heroes have dark hair?  Well, that’s true, but that’s not what it means.  Darkly, within my writing context, means I may (usually) include elements of dark humor in my stories, mostly sarcasm or snark.  The bad guys get to be funny occasionally, maybe even crack a few jokes.  At least that is what I’m striving for.  Humor is always subjective, of course.  I enjoy a happy ending as much as anyone else though, so I don’t see myself ever having the main character wiped out by a bus on her way to her wedding.  That’s a different kind of dark that I don’t mess with.

The best news about declaring myself a lover of darkly romantic curmudgeons and claiming the title for myself?  I am now a certificate-bearing member of the International Society of Curmudgeons: 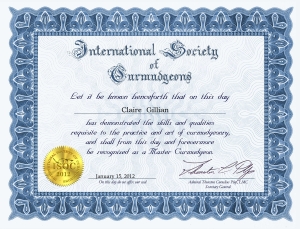 I’d love to tell you more about the ISOC, but I’m currently angry with them for having the most annoying website I’ve ever visited.  When I calm down, I’ll tell you all about it.  Suffice to say the ISOC agrees with my self-designated title of Master Curmudgeon.