Today I have a very special guest, a lady who is destined to be one of those “I interviewed her once” names I’ll drop in the not so distant future. She’s already released one book with Carina and has another on the way (more on her books at the end and the chance to WIN an e-copy of her novella, Blue Galaxy). I’m definitely a fan.

I met Diane on Absolute Write. I knew her there as a horror and science fiction short story writer under the screen name of Dolores Haze (Lolita anyone?).  She always had great avatars featuring the works of fellow Scot, Graham McKean. I’m not sure which of my pitiful freshman pieces she critiqued, but somewhere along the way she did, or I did one of hers, and we connected.

Diane was also one of the first writers to also reach out to me on Facebook, back when I was a social media Howard Hughes. All I remember is wondering why, and Diane said something that touched me, and I’ve never forgotten:  “Because I like you.”  Nothing about social networking or back scratching or any of that sort of thing. Well, I like you too, Diane, and am honored to be able to share you with my readers today.

Most writers I’ve met had someone in their past who saw a certain spark in them. Tell us who in your younger days encouraged you to write or made you think maybe you could?

Mostly my teachers told me to stop daydreaming, stop fighting and stop truanting. I did have a couple of teachers who encouraged me, though I didn’t always appreciate it at the time. One teacher made me stand up and read a rather tragic story to the entire class. It was a first-person account of a child dying from starvation and I really, really did not want to read it out loud. So embarrassing to read my own words! I’ve gotten a little better since then, but only a little. Once one of my  stories is published I have to force myself to read it. I’d rather pretend that it had never existed.

Hanging out at Absolute Write can be an overwhelming experience there is so much talent there–from fledgling authors to authors who have worked hard to hone their craft and have gone on to ink some sweet publishing deals to seasoned veterans who graciously share their wisdom. What’s the best advice you’ve received from any source that you pass on to others.

The best writing advice I’ve received is very simple. Sit down, put your hands on the keyboard and write. There are all kinds of how-to-write books out there, but none can replace this simple advice. The best life advice is also simple: don’t sweat the small stuff, assume good intentions and be useful. I’m not exactly a philosopher, am I?

I don’t know about that. Some of the best philosophies are the most simple and straightforward.

Tell us what’s in your writer’s trunk, whether because it was a sub-par effort, you lost steam on it or you just couldn’t find a receptive audience.  Do you have any plans to try to resurrect any of your trunk’s contents?

There are a few short stories in my trunk. They are the ones I gave up on trying to sell. They’re too odd, too violent, too sexual or too-something to find a market. I haven’t abandoned them. I’m keeping them safe until I can find a way to make them saleable. There’s one novel in there too. I’m waiting until my writing is good enough to pull off the premise. One of these days I’ll be good enough for it. I hope.

What’s your “brand” (whether achieved or building)?

I have the hardest time with this. I’m a writer and I write whatever takes my fancy. Science fiction, romance and horror are what I’ve been able to sell so far, but it’s quite impossible to pull that together into a brand. Other stuff I’ve written doesn’t fit easily into these genres. I have a several items on my to-write list that’ll take me into yet other genres. I can’t seem to fit myself  tidily into a brand. I guess I want my brand to be my writing style, regardless of genre. I’d describe it as …oh, hell. I don’t know.  Someone read my stuff and tell me. Puh-leeze.

Diane, I think you have the chops to easily define your own genre or brand and be totally successful.  You’ve already bucked a few romance tropes with Blue Galaxy, with its broken-down hero, Javan, as the narrator and the strong female heroine who bests him.

Let’s talk about the creative side of writing for a second. When and Where do your best ideas come to you?

Usually when listening to music or reading poetry. Many of my stories come from daydreaming over a line of poetry or a song lyric. Blue Galaxy, for instance, started with me listening to Roddy Frame’s song, Small World, over and over again. The lines:  “rushing through the stars, captivated by the worlds beyond. So far. Unknown,” gave me a character. A young woman stares up at the stars, wondering what’s out there, desperate to find out.  Blue Galaxy’s Sola was born. I pretty much always start with the characters and go from there.  Another story came from a line by Pablo Neruda:”These are the stories of seaports. A man clambers a hillside. And such things come to pass.” I got a whole novel out of that line, starting with the thought: who the heck is this guy and what waits for him at the top of that hill?

Can we be nosy and peek inside your private life for a second, in a non-stalkerish kind of way?  Describe what’s on your nightstand.

A pair of broken reading glasses, a reading lamp, the dreaded alarm clock, my beloved Kindle and a pile of books. The top four books on the pile are: Venus On The Half Shell by Kilgore Trout, Soiled Doves: A History of Prostitution in the Early West by Anna Seagraves, White Horse by Alex Adams and The Comfort of Strangers by Ian McEwan.

Wow! What a great assortment of reads!

Thank you so much for dropping by, Diane.

Thanks for inviting me to your blog, Claire!

Now, my lovelies, Diane has a treat. Please mosey down to the comments for a chance to win an e-copy of Blue Galaxy.  The only requirement for entry into the random drawing is to answer this question: Where in the universe would you like to travel to? 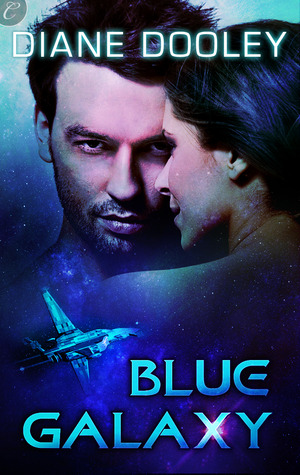 Diane Dooley was born in the Channel Islands, grew up in Scotland, has lived in several of the United States, loves to travel and to this day still suffers from wanderlust.
Since Diane was a voracious reader from a young age, it seemed to make perfect sense when she decided writing might make an enjoyable hobby. She has since realized that ‘enjoyable’ is entirely the wrong word. Her short stories have been published in several online venues, and she is a regular contributor to the science fiction blog The Galaxy Express.
Diane currently lives in a money pit of an old farmhouse in upstate New York, where she tends her husband, sons and a collection of reptiles. When she is not at her day job, she is either reading, writing, gardening, avoiding housework or driving her children to various sporting events. She is also a geek of intergalactic proportions with a severe YouTube habit.

Blue Galaxy (Published by: Carina Press, May, 2011) can be purchased here and from all the usual online retailers.

The sequel to Blue Galaxy, Blue Nebula, will release soon, also from Carina Press.  Diane has yet another release pending, a sci-fi romance novella called Mako’s Bounty to be published as part of Decadent Publishing‘s 1NightStand series, sometime in the spring of 2012. Links to short stories are here.  I did say she was very busy, didn’t I? I’m sure I did, not that it’s necessary at this point.

You can find the marvelous Ms. Dooley in the following haunts:

26 thoughts on “A Brief Visit from The Magnificent Diane Dooley!”